The Internet Isn't Real. Chocolate, Incest, And Miniatures With Broccoli On Them Are.

Kirin Robinson wrote Old School Hack, a nifty, streamlined, award-winning free version of '80s D&D that, in addition to being played by real people, is also unaccountably popular among desperate lunatics who think that there are no good reasons to play actual '80s D&D.

Kirin also curated Women Fighters In Reasonable armor, a nifty tumblr of pictures of women in fighting gear that, in addition to being a great resource for real people, is also unaccountably popular among desperate lunatics who think that pictures of boobs and boob armor are where sexism comes from.

Every week he completely ruins his reputation by running Rappan Athuk at his house using Basic D&D and running it for us. And then we make fun of the desperate lunatics on the 110 home.

Here's Mandy's instagram feed for today's game...
We were talking about wargames...

Mandy: "In high school I knew this guy who had this whole room in the basement completely taken up by this huge warhammer table, I considered fucking him just so I could play."

Me: "That is the only time that sentence has ever been uttered in the entire history of time."

"Well, I didn't. He was old. My friend did, though, they were cousins."

"Oh, it just got dark. Why does it always have to get dark?"

"THAT DOESN'T MAKE IT BETTER." 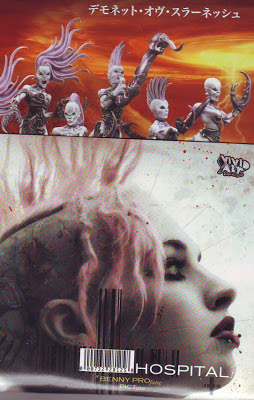 That table makes me think I really should provide my gaming group with something more than just coffee and spot of milk.

Any chance we could get a pic of that dwarf portrait? It looks great, I didn't know Mandy drew.

Nice pictures! I knew you were an artist - didn't realize Mandy was too.

Jam looks fun, has he been around long enough to inspire a good story or more art?

He has an iron foot.

You actually get to play with Kirin Robinson...THE Kirin Robinson...himself...like, right there at his house? Nothing personal, but I hate you now. And yes, Old School Hack is totally brilliant.