Fishwives typically appear clad in long white dresses of moist lace and inhabit rotting, rudderless vessels or lonely towers perched atop islands far out at sea. They use magic to ensnare passing ships, order their subordinates to shanghai the luckless crews, and seek to marry the comeliest males among them in short, bizarre ceremonies presided over by docile, stoop-shouldered, fish-headed clerics in tweed vests.

In appearance, the fishwives are entirely horrific, with their fishy heads and fish-scaled skin contrasting more decisively and more grotesquely with their human anatomy than in the case of the (perhaps unrelated) kuo-toa.

Despite their fondness for human finery, the fishwives are aware of the loathesomeness of their condition, and deplore it. It has been theorized that they hope, through unions with attractive human males, to gradually breed the hideousness out of their bloodline. The efficacy of this strategy is as yet untested, as every man awakening groggily from this or that unsuccessful attempting to repel a seaborne raid to find himself dressed in formalwear in a crude chapel on the arm of a fishwife has either divorced her immediately or died trying. 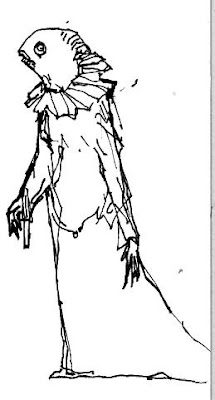 The magics employed by the fishwife are akin to those employed by the sea hag, typically imparting influence over weaker creatures, foul weather, the body, and the brine.

I will pair them with scrags for Wyrd Greyhawk.

Oddly, a Black Lagoonish creature & the attendant cult (called "The Fishwives") are the focus of my game on Sunday.

Kudos: I had to {had to I tell you!} scroll to the right while I read this article so that the left-side illustration couldn't *stare* at me while I did so. Bravo good sir.